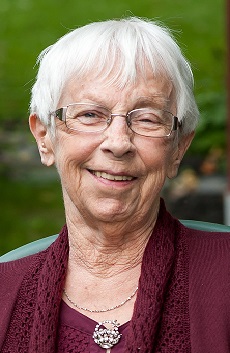 Winnifred Griffith (Gee) died peacefully at 85 years old on Thursday afternoon November 23, 2017 at the Wales Home in Richmond, Quebec, surrounded by her husband Royce, family and caring staff.
Winnifred, dear sister of Brian (Joan) and the late David (Gayle), was the first born child of the late William and Annie Gee (Hughes). She was born March 25, 1932 at the family farm in Gore where she spent 55 of her 85 years. Winnifred met Royce on the first day of the second grade at the Gore schoolhouse and they married on September 24, 1955. Two years later they were blessed with their first child, Jennifer (Geoff Webber), who sadly predeceased her. Winnifred and Royce's family continued to grow, with the additions of Peter (Charlotte Beattie), and Douglas (Allison Beattie).
Winnifred will be missed by her many grandchildren, Anne, Erin (Matthew Toth), Kyle (Marie-Pierre Bégin), Amber (Eamonn Waters), Robin (Andrea Jung), Jamie, Alexander, Jessica and Kathleen, as well as her two great-grandchildren, Élizabeth and Liam, and many long-time friends.
Until her health no longer allowed, Winnifred was actively involved with the Richmond-Melbourne United Church.  As well, she dedicated much of her life volunteering at the Wales Home, and was a life member of the Gore Women’s Institute.
On Friday December 1st from 7 to 9 pm, visitation will take place at the Cass Funeral Home, 295 Principale Sud, Richmond. On Saturday December 2nd, visitation will take place at 10 am at the Richmond-Melbourne United Church 247 Principale Sud, followed by the funeral at 11 am.
In lieu of flowers, please consider donations to the Wales Home Foundation or to the charity of your choice.