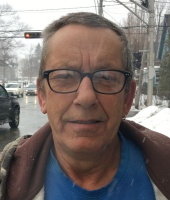 It is with regret that we announce the sudden passing of Terry Boomhower Sr. on November 26th, 2018 at the age of 63.  He was the loving husband of Janet Brown, living in Way’s Mills.

He was a dear father to Paul, Richard, the late Michael, Neil, Patrick, George, Mack and Terry Jr.  He will be dearly missed by his 9 grandchildren, his brothers and sisters: Ralph, Jimmy, Doris, Alice, Harry as well as his half-sister Violet and half-brother Francis.  He was a brother of the late Roy. He will also be missed by many cousins, nephews, nieces, extended family and dear friends.

The family wishes to thank all the emergency and hospital personnel for their compassion. As well from his family and friends.

In lieu of flowers, donations to the Diabetes Estrie, 600 Rue Woodward, Sherbrooke, QC J1G 1W3, or to the Heart and Stroke Foundation, 100-2630, King Ouest, Sherbrooke, QC, J1J 2H1, would be greatly appreciated by the family.

I'm sorry so to about terry