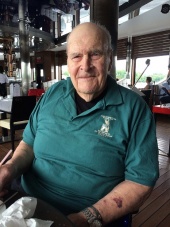 It is with great sadness that we announce the passing of our father, grandfather and great-grandfather on the evening of Sunday, April 25th, at the Grace Village, Sherbrooke, QC. He was the son of the late Benjamin Perron and the late Éliza Blouin. He was the husband of the late Florence Blouin. They were married 64 years before her passing on January 1, 2018. He will be greatly missed by his eight children: Gabrielle (Douglas Newman), Suzanne (Brian Fitzpatrick), Madeleine (Donald Kelly), Marthe (William Clark), Jacques (Ann Davidson), Diane, Pierre (Annie Demers) and Maryse. He was the grandfather of 10: Kevin (Stacey Dunn) and Lisa (Marc Brennan) Fitzpatrick, Caroline, Angela and Dr. Alex (Émilie Brunet) Kelly and Philip, Ellen, Kathryn, Émilie and Benjamin Perron. He was the great-grandfather of Jade and Brock Brennan and Olivin Kelly. He leaves to mourn his brother Jules (Irma) and his sisters Alice Hall and Liliane Verhoef and his sisters and brothers-in-law from the Blouin family: Lucien, Georges, Peggy, Rachel (Harold Willey), Raymond (Carole Robideux) as well as many other relatives and friends.

Due to the rules and restrictions governing Covid-19, a private viewing and funeral service will take place.

In lieu of flowers, donations to the Grace Village, 1515 Pleasant View Street, Sherbrooke, QC J1M 0C6 would be greatly appreciated.

So sorry to hear of you father passing. Hope you and your family are doing well. Thinking of u at this difficult time.

My deepest sympathies to Douglass and Gabrielle Newman and the family.

Sorry tp hear of your father's passing. My condolences and prayers are with the family at this time.

Our condolences to the Family. Our thoughts & prayers are with you all at this difficult time.

Our deepest sympathies to Douglass and Gabrielle Newman and the family. Sorry to hear of your fathers passing. Our thoughts and prayers are with you all at this difficult time.

Our deepest condolences. We are thinking of you all during this difficult time !

So sorry to hear. Please accept our deepest condolences.