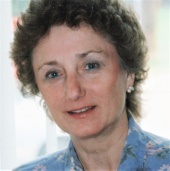 Marie Öri Burns passed away August 29, 2022, at Grace Village, Sherbrooke, Quebec. Marie was the beloved wife of Robert Burns of Island Brook. They celebrated 65 years of marriage earlier this year. Marie was 93.

Marie’s children, Kathy (David Walker) and Andrew (Heather Moore) give thanks for her life, as do her much-loved grandchildren: Winston, Thaddeus, Nathan, and Adriel Walker; and Ashton, Karleen, Darby, and Kelson Burns. Marie is survived by her loving youngest brother, Csaba Troester.

Maria was born to Erszébet Karolta Domjan and Endre Öri on April 16, 1929, during an unusual snowfall in Budapest, Hungary. At 18 and on her own, Maria “Marie” Öri arrived in the snowbound month of January at Halifax’s Pier 21 to begin life as an aspiring Canadian in 1948.

Marie was soon working and training in Ontario as a nursing assistant at facilities in Brockville, Toronto, and Hamilton. While observing a roommate’s life of faith, Marie experienced a conversion and became a follower of Christ. She studied at Eastern Pentecostal Bible College in Peterborough and was commissioned as a deaconess to the Lennoxville (Quebec) Pentecostal Church in 1956. Many lifelong friendships immediately took root. It was not long before Marie met Robert, an introduction made by his sister Margaret. They married June 8, 1957, and made their home in Island Brook, where they lived many chapters of a life dedicated to family, faith, and community. Marie’s hospitality and generosity were well known.

Always reading, Marie earned a bachelor’s degree in English Literature, graduating Bishop’s University proudly on the same day as her son in 1984. Marie was an artist and a writer. Her self-taught needlework was superlative. Among her many writing projects were two books, an autobiographical novel and a memoir, tracing the immigration story of a young girl who finds an open door in Canada and a home with the love of her life.

Marie was diagnosed with Parkinson’s disease in 2006 and she and Robert managed together at home until late 2017, when she moved to Grace Village. Robert and her children are profoundly grateful for the care and dignity the people of Grace gave to Marie in her final chapter.

One of Marie’s favorite scripture verses was “Behold, I have set before you an open door, and no man can shut it.” Open doors defined Marie’s earthly life, and with her final breath there was one more open door at last visible to her.

I was saddened to hear of Marie’s passing. It was a pleasure to care for her in this last year. We often connected over our love of ice cream and tea. Rest In Peace precious lady .

I was saddened to hear of Marie’s passing and send my heartfelt condolences to you all. Marie was part of my life for many years and is Gramma to my children. I remember fondly my last visit with her ( and Robert) in Island Brook, she welcomed me always. I know she loved her family and her community and know she will be missed.

To my family, My sister Marika was loved and will be missed.

Please know that Marika was so special for our family that loved her beyond her expectations. I will miss her so and know that she has a special place with our Lord and Savior. She is again reunited with our Mother, sisters and brothers. A reunion the Angels prepared for her as one of their own. I love you Sis, I pray for you with pride and a deep love of a life lived well. Your baby brother loves you with a prayerfull heart for your family. God bless you and we will celebrate again our lives as a family reunited.

Our thoughts and prayers are with all the family.

Marie was a very special person to us. She was our saving grace. Marie helped us out in so many ways. Paul always loved working for her and making things for her. We will miss her dearly.

Marie was a wonderful example - a faithful believer with her own personal style. She was no cookie-cutter Christian and showed us how it can be done. God bless you Robert, Kathy, and Andrew. Our prayers are with you.

You cannot be present or you wish to offer something ?

We will personally deliver it to the family