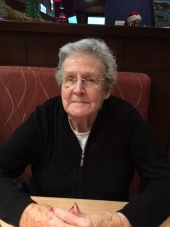 Audrey was born in Bulwer, Quebec on August 31, 1927 to Orrin and Ruby Bailey.

She worked for several years at the Littleton Savings Bank in Littleton, New Hampshire. She also worked for Amador Hydraulics (Brampton, ONT) before retiring and moving to Nova Scotia. She loved to travel and made annual trips to Reno and Arizona to visit her sons (and yes, even found time to visit a casino or two – more often than not a big winner!). She had also traveled to Israel, Portugal, and the Netherlands.

Audrey moved to the Manoir St. Francis in Sherbrooke six years ago, where she made many new friends…and even encountered a few from her youth. She was often the life of the party at the Manoir and was a feared bingo player. She’ll be missed. The Toronto Blue Jays have lost a dedicated, major league fan. A special mention goes out to Sandie Williams, who was a great help to Audrey during her last years in Sherbrooke.

Cremation was handled by Cass Funeral Homes in Sherbrooke. Burial will take place in the Eaton QC cemetery, next to Reta and Howard Picard. A small family celebration of life will be conducted at a future date.

She will be missed for sure. Our sympathy to all