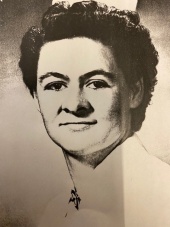 It is with sadness and yet with thankfulness that Clair peacefully passed into the presence of her Lord November 4th at the age of 98. Clair was born September 22, 1924, at Waterville, to William and Ethel Ellen Bernard (Parkinson). She was predeceased by her parents and her brothers Haines (1999) and Clayton (2010). Clair graduated from the Sherbrooke Hospital in 1945 and did post-graduate studies in obstetrics in Winnipeg. Clair was part of the founding team and the first matron of Grace Christian Home, Huntingville, in 1957, and of Connaught Home, North Hatley, (1970). She was the last member of the original group who founded Grace. In that year she married widower Albert (Bert) Fisk, of Montreal, and gained a large family, Rod, Ruth, David (deceased), Lois, Heather, Lynn, and Sharon, as well as many grandchildren and great grandchildren, who lovingly called her “Grandma Clair”. Bert went home to be with Lord in May 1983, after 13 very happy years together. Clair retired in 1989, but continued nursing for several years on a part-time basis and served on the Board of Directors. She truly loved the Lord and was faithful to the Grace Chapel in Sherbrooke. She also conducted Bible Studies throughout her life. In her last years, as her health declined, she was lovingly cared for by the staff at Grace. A sincere thank you to Sandy Klinck and all the staff.

A memorial service will be held at Grace Village – Faith Hall,1515 Pleasant View Ave. J1M 0C6. Sunday, November 20 @ 2:00 p.m. Followed by a committal service at Huntingville cemetery in the Spring 2023, where she will be laid to rest beside her husband awaiting the glorious return of her Lord.

Donations may be given to the Grace Village Foundation – Dr. Klinck Support Fund in Clair’s memory.

Family and friends of Clair

After I finished high school, I worked at Grace prior to going in training at the CBH . Clair helped me to gain confidence which I know contributed a great amount to my ability to complete my course.
She was an awesome example of a christian woman’s service to others. She now rests in the presence of our Lord.

Sincere condolences to the family, Clair was so proud of her family , May she rest in peace with her Lord and savior .
Gordon and Jean Parkinson

Our thoughts and prayers are with all the family at this time. Clair was such a large part of the Lennoxville Community and will be forever missed. The home was clearly her extended family and her care was so very sincere.
RIP Clair. You are home.

You cannot be present or you wish to offer something ?

We will personally deliver it to the family