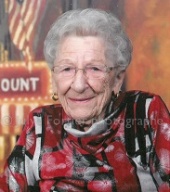 Peacefully at the Hotel-Dieu Hospital in Sherbrooke, on October 28, 2019 in her 93rd year.

Daughter of the late Helen Mayhew and Rufus Dustin, predeceased by all her siblings, Randolph, Royce, Garnet and Phyllis.

Roberta grew up in North Hatley and Ayer’s Cliff and spent most of her life living in the country on Suitor Road in Huntingville where she raised four children.

Predeceased by her husbands Alan Wark and Murray Baldwin and her son Peter Dustin Wark.

Grandmother of Sarah and Peter James Wark, Amy and Tim Grey and Jerry and Stephanie Corbeil. Great grandmother of seven.

The family wishes to thank the caregivers at the Residence Manoir Gale in Waterville for the exceptional care given to Roberta as well as the compassionate doctors and nursing staff at the Hotel -Dieu.

We are saddened by the death of Roberta but we are happy that she is off to a better place where she can feel peace after many years of failing health. We share a toast with all of you to have known such an incredibly strong woman.

Private burial will be held at a later date.

My deepest sympathy to Roberta's family.

Roberta and I worked together for many years at Bishop's College School and we remained friends over all these years.

I visited her at St. Francis Manor, at Grace Christian Home, Grace Village and at Manor Gale and we always spent time reminiscing together. I went to see her this summer and, even though she was in failing health, we had a wonderful time of sharing, even some laughs.

I will treasure the memories I have of my dear friend and colleague, Roberta. I know God has prepared a special place in Heaven for her, and no more ill health.

I'm so sorry for your loss my friend. My thoughts are with you xxoo

Jim ,your Mother was a very Nice Lady I am glad I got to know her back in the day. Take Care .Kevin Turk Doherty.

To Jim, Wendy and family:

We were saddened to hear of Aunt Roberta's passing. We knew that she hadn't been well for some time.