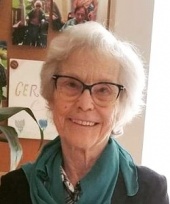 Nora Wilson "PJ" (Rolfe), former resident of Stanstead, QC., at age 80, peacefully passed away on January 7, 2022, at Magog Hospital after a courageous battle with Alzheimer's Disease.

Nora was the widow of Chester Wilson, formally from Smith's Falls, ON., and was born on Feb., 12, 1941, in Marbleton QC., to the late Percy and Desneige Rolfe ( Nadeau).

Nora is survived by her daughters and their spouses, Laura-Lee and Raymond, Shirley and Gailen, and Dorraine and Donald, grandchildren, great-grandchildren, nieces, nephews and many friends.

Due to current circumstances, a graveside service and Celebration of Life will be scheduled at a later date.

In lieu of flowers or donations, the family requests that you preform an act of kindness in Nora's honor.

Thinking of you and sending a virtual hug. After reading the obituary, Laura, I see that you have had many losses in your family. My heart goes out to you all. I pray the many good memories that you have and the love of family and friends surround you, comfort you and uplift you as you journey onward.
Hugs,