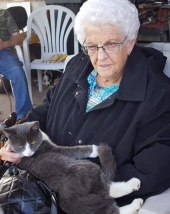 Very sorry for your loss of a special lady

My sympathy to everyone of the family... and friends

All her family & friends

Our deepest condolences to all, may she Rest In Peace.

All Family Members and Friends

We are so sorry for your great loss.
Our thoughts and prayers are with you all.
Deepest sympathies to all.

the family and friends of Mayotta

In writing for The Record, one of the most pleasurable and interesting interviews I ever did was with Grant and Mayotta Taylor in 2014. I had occasion to speak with Mayotta a few times over the years, most recently just after the St. Paul's Rest Home closed. I will miss her, as I miss Grant, but am so grateful to have met them. Here is my article from 2014:

It’s been a love affair with life, and most of all with the people around them. Mayotta has a map in her head, a social map. She knows the names of everybody who used to live in every house. On her map is where she grew up, Sawyerville and surrounding villages. And now she’s got a similar map of where they live, Lennoxville and beyond.

“I knew where everybody lived in Sawyerville. I could name everybody right up through Clifton, Island Brook. I used to go around with my grandmother when I was a little girl, down in North River, by horse and buggy,” she said.

Grant has a similar map in his head. It’s of all his friends and relatives, especially those who served in the war, and who are part of the Legion. He’s vice-president of the very active and very venerable Canadian Legion Branch 38 in Bury. His uniform today carries an impressive row of medals as witness to his war experiences. The Legion has been there 80 years. Come this year’s birthday, Grant himself will have been among us 93 years. And Mayotta, 90 years.

To hear them talk is first of all to see a dance of words. He says and she says, turn by turn. Their thoughts and their phrases complement each other in rhythm. “Our steps will always rhyme,” wrote Leonard Cohen. For Grant and Mayotta, it’s their conversation, but also their lives.

And they’ve lived their lives together, facing outward. Working hard. Involved in their community. Keenly aware of the interconnected web of human relationships that make up their communities and their families. And keenly interested in the people around them. It’s a dance.

And they’re still dancing. Literally. They go to the Sawyerville Hotel. They dance together, but when Mayotta’s wind gives out, Grant dances with Carol Vincelette, hotel co-owner and musician. They go to socials and play cards at the Bulwer Community Centre, and with the Golden Age Association. They like to drive. They go out to eat often, across the landscape. Compton, and beyond.

They met each other at a dance, they say. It was during World War II. It was the first night after Grant came home from England, where he was a heavy transport driver in the Air Force. A photo of him in his uniform shows a handsome young man with blue eyes.

“It was a Saturday night,” Mayotta says. “I knew who he was. There was a dance at Batley’s Pond. So I went with my brother Raymond and my brother Norman and his wife, and he had a sister Doris, so that night I met Grant there at Batley’s.”

“Two or three of us boys were sitting there,” says Grant, “and two or three girls went by, and one pointed at me and says “he’ll do!”

They laugh. In reality, they’d known each other before the war. Grant had worked with Mayotta’s brothers, driving trucks. They were married a bit less than a year after that dance.

Grant says, “We were old enough.” Mayotta says, “I was 21. Because there were no boys left in Sawyerville at that time.”

“Our first rent was $25 a month,” he says. “My mother’s house in Lennoxville,” Mayotta says. “I was getting $32 a week, driving a milk truck. And on weekends I’d drive taxi,” Grant says. “He had to work Sundays too,” Mayotta says.

“I was eight years old when the Depression hit. And I was 18 when the Second World War hit,” said Grant. “We both came from poor families. No need to ask for anything, because it wasn’t there.”

Grant grew up in Birchton. “I was adopted by the Taylors, and I was brought up to work,” he said. He went to a one-room school in Birchton. Then for grades 8 and 9, he walked to Bulwer, two and a half miles one way. “So you didn’t need gym for exercise,” he said. “We had enough to eat.”

So did Myotta’s family, in Sawyerville. “Because Grandma lived there. And whenever she killed a pig or anything, we got some of the meat. We had a cow and a horse and a pig and hens. My duty was to gather the eggs. No running water. A pump. Take a bath once a week. Pump that water. Put it on the stove in a copper barrel. Heat it, and then put it in a galvanized kettle in the middle of the kitchen floor. I had my bath, and then my younger brother Stanford, he had to use the same water as I did. But we survived.”

“Lucky” is a word they both use often. “My father left when I was one year old,” says Mayotta. “I never knew what it was to have a father. I was lucky to get Grant. He’s been a good provider.”

She was lucky to get a pair of tube skates when she was a young girl. She’d hated her bob skates (double runners). She played hockey. She loved it. She played on a team in Sawyerville, as a teenager, and again after they were married, in Lennoxville.

“I think they called them the Sawyerville Bushwhackers,” says Grant.

“Oh that was the Sawyerville team,” says Mayotta. “We came to Bishop’s to play, aye, and the rink was bigger, and we had the boys’ – all their sweaters and pads and pants on. Because we used to practice with them. And we were tough and rough. We could stickhandle.”

Grant played, too, but as a musician. He played the French horn in a band in Cookshire. He was the youngest, about 12 years old when he started. They played around the region. “I remember him playing on the veranda of the Sawyerville Hotel,” says Mayotta.

He doesn’t play the horn anymore, but he sings. On special occasions, he’s a soloist at the Lennoxville United Church. The maps in their heads are peopled with the church people, too. Some that have passed on, and the younger generations still there. Past and future, time and space intersect in their landscapes.

They have books of precious memories. Photos of family and trips they’ve taken. Artefacts that are landmarks of their lives and the lives of their communities. For example, an imposing pendulum clock that came in 1925 from the train station in what is now East Hereford. It came from an uncle, and they hope to keep it in the family.

And they both worked. Mayotta worked in stores and restaurants, starting in Lowry’s store in Sawyerville when she was 14. They were lucky to always have work, Grant says. They are lucky to have his veteran’s pension, he says. They are lucky to be alive. Mayotta had a bout of cancer – it runs in her family, she says. Their son Gary Ford died of cancer in 1998. She’s lucky to be alive, she said. They had just one son, but took in two nephews. That was lucky, too.

Now the maps in their hearts are full of their nieces and nephews. It’s a rich map. It extends beyond the Townships, and it extends years back before most of us were born. But it’s a living map, with an active present.

The Townships are lucky to have them, vibrant representatives of our oldest living generation.

Sorry for your loss. She will live on in your hearts but will be missed.

I have had the privilege of meeting Mr. and Mrs. Taylor a few years ago. I am saddened she is gone. I send my most heartfelt condolences to all.