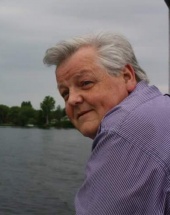 It is with deep sadness that we announce the passing of James Wilson on August 16, 2021 in Sherbrooke, Quebec, after a brave fight with pancreatic cancer. He battled his illness in the same way that he led his life - with quiet courage and humility.

The youngest son of the late Andrew Wilson and Margaret McLean, he is survived by his loving wife, Elvina Koay, his two sons Giancarlo (Bianca) and David (Arielle), and countless other friends and family to whom he brought much joy, kindness, and laughter.

Born in Glasgow, Scotland, and formerly resident of Montreal, James made Lennoxville  his true home over the past 20 years. A professor of English literature, he could (and routinely would) recite the works of Milton, Shakespeare, and Keats from memory. As a film and TV enthusiast, he could re-watch No Country for Old Men and Twin Peaks 100 times without ever getting bored. As a music lover, he could listen to Led Zeppelin, The Cure, and Depeche Mode on repeat and insisted on passing along his good taste to his two sons. He was a long suffering fan of the Dallas Cowboys and Tottenham Hotspur FC but was very fortunate to witness Italy win the World Cup on two occasions and recently the European Championship.

His home was filled with art, single malts, cats, koi ponds, firewood, books, records, and constant warmth. James never said no to someone in need; that's just who he was.

In lieu of flowers, please consider making a donation to La Maison Aube-Lumière in Sherbrooke, Quebec. The family extends its sincerest and most heartfelt thanks to all of their staff who showed him remarkable care and compassion. The family will receive condolences at a visitation to be held on Sunday, August 22 from 6:00 to 8:00 p.m. at the Cass Funeral Home at 3006 College Street in Sherbrooke (Lennoxville), Quebec

I am so very sorry to hear the news of Jame’s passing. I know that words offer little comfort and hardly soothe the ache and sorrow of losing someone so beloved, but please accept my most heartfelt sympathies and know that you will be in my thoughts.

My deepest sympathy. I remember James with fondness at Champlain College and was always impressed with his love of English Literature when ordering his textbooks. Cherish the memories.

Jim was a good friend whom I greatly admired and respected over the 14 years I knew him. We first met at Concordia University around 2007, when we were both contract teachers there. We later reconnected when I started at Champlain College in 2012. Around the same time, Jim and Elvina welcomed me in their home, making me feel part of a new community of like-minded lovers of literature and art. Jim's knowledge of literature was astounding, and, as stated above, he could indeed recite Milton and Keats from heart (I witnessed it). In later years, Jim and I connected less frequently, although we always managed a meal or beer together around Lennoxville once or twice a year. I'm reminded above all of Jim's great sense of humour and love of life, his wonderful storytelling ability, and his passionate devotion to literature and education. Our profession and community are both poorer with Jim gone. I will miss him. My heartfelt condolences to Elvina and the rest of Jim's family.

We were devastated to learn about Jim's passing. Please accept our deepest sympathies. May you take comfort in all the wonderful memories.

On behalf of myself, Lynn, Nikita and Natasha, I would like to express our deepest condolences at Jim's passing. We have many fond memories of Jim, and you are in our thoughts.

Much LoVE and sincerest sympathies to the entire Wilson family. May his memory be a blessing.

I am very sorry to hear about the passing of James. My deepest thoughts, sympathies and prayers go out to you and your family.

I had the good fortune to meet James some years ago at the College where his presence was esteemed and one we all enjoyed. Also, both my daughters Elizabeth and Alyson had him as a teacher whom they loved and recall with fondness and appreciation.
Later, after he retired, we’d have the occasional weekend breakfast with a few friends.
Although I couldn’t share his infatuation with European soccer, he nevertheless patiently tried to educate me in this respect.
I always felt a kinship in his wry sense of humour and valued his unique perspective on the world. He was a lively yet gracious guest at any party. I only wish there had been many more opportunities for us to meet.
I will always remember his voice, and his easy laugh had an endearing quality that still resonates with me.
I find his untimely passing and suffering quite upsetting.
My thoughts go out to Elvina who accompanied this remarkable man through his terrible ordeal. He was immeasurably fond of her.
Our heartfelt sympathies to the family.
Kevin McKenna & the twins.