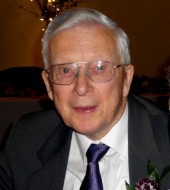 James Robert Jones passed into the presence of the Lord on September 14, 2020 at the Hotel Dieu, Sherbrooke, QC. He was the devoted, loving husband of Burleigh Anderson Jones for 67 years.

James was born on September 13, 1928 in Harrington Harbor, QC.   His parents were Wilfred Jones and Dorothy Cox. He was a light housekeeper on Cape Whittle Island for 6 years. At the International Grenfell Mission in Harrington Harbour, QC he worked as a radio operator, maintenance, and security between 1965 to 1971 and in 1972 he became a devoted assistant administrator there, under Dr. Donald G. Hodd. He retired in 1988. He and Burleigh were also part of the Canadian National Weather Service during this time. He was a devoted man of the church and an avid Montreal Canadians fan. He had a gift and curiosity for making, fixing, or inventing items that could be used in an isolated community. One such project was an airboat he built from scratch. He shared this passion with his son Neil who he spent many hours doing such projects in his early retirement. His daughters also benefited from his ability to fix almost anything. He loved helping other people and always made them feel welcome in his home. He retired to Sherbrooke, QC in 1989 to be closer to his children Norma and Neil. Jim and Burleigh enjoyed traveling and visiting their daughter Helen in Massachusetts and relatives in Florida, Edmonton, AB, and the Maritime Provinces.   He spent his last few years at the Grace Village, Retirement & Assisted Living in Sherbrooke, QC.

We will miss his kind, helpful, loving, gentle spirit.

Funeral Services are private and will be conducted at the Cass Funeral Home in Stanstead. In Lieu of flowers, donations in memory of Jim G. D. Hodd Pavilion in Harrington Harbour, QC and Griffith Cemetery, Ogden, QC.

Interment will be at the Griffin Cemetery, Ogden, QC.

In lieu of flowers, the family would be grateful for donations to the Camille-Marcoux Foundation (The D.G. Hodd Pavilion), 1070, boul. Dr Camille-Marcoux, Blanc-Sablon, QC, G0G 1W0 (fondation.camille-marcoux.09bcn@ssss.gouv.qc.ca); or to the Griffin Cemetery, 7025 Chemin Griffin, Ogden, QC, J0B 3E3.

TO ALL THE JONES FAMILY,

My Deepest Sympathies to all ,from Mary Lou Gustin

Our sincere condolences to all. Uncle Jim was a true gentlemen and will never be forgotten. We send you all peace, love and light.
Love,
Harry, Joce and family.

Our deepest sympathies Norma and your family on the passing of your father.

Dads are very precious and always so difficult to lose a parent.

Our thoughts & prayers are with you all.

Dear Burleigh and family
My deepest sympathy to each of you on the passing of your wonderful husband, father and grandfather.
It was always a pleasure to visit with him and enjoyed our many breakfasts Sundays after church.
Sending you my prayers and love.

It was a honour to care for Jim, I wonderful loving man. He always gave my hand a squeeze or a kiss. Kind and respectful. He will be missed. My sympathies to the whole family.

Our deepest sympathies to you and your family, our thoughts and prayers are with you all
love from
Bonnie and Clint

Our heart felt condolences go out to all of you. Our prayers are with you always. The passing of family is a difficult time. Your memories of his life remain and to be celebrated. We will hold each of you in our heart and prayers.
Loving each of you always you families in Nova Scotia.

Cheryl Larocque and all the families here, le 21 septembre 2020

Please accept our deepest sympathy. We are thinking of you during this difficult times.

Sending deepest sympathy to all the family, so sorry to hear of Uncle Jim’s passing, I have wonderful memories of when they would visit me in Toronto. R.I.P. dear Uncle Jim

Sending heartfelt sympathy to,you all. Our thoughts and prayers are with you....God bless you all... cherish your memories!

The Family of James.

We extend our heartfelt sympathy to all of you! From the wonderful stories we have heard about him we know he will be truly missed by his family and his friends. Our thoughts are with you during this difficult time. May he rest in peace.

Norma and Marc Andre and all the family

My thoughts are with you and the all the family at this difficult time. It's never easy to lose a loved one. My sincere sympathy.

Our deepest sympathies to the family. Sincerely,
Brad Grapes and family.

Dear aunt and cousins, we are with you in thoughts as it is impossible to be there in person at this time, oh how we wish we could! We will miss uncle Jim very much although we didn't get to see him much in the last years, may his sweet soul rest in peace in the arms of god. Our most sincere condolences to all of you. Love and hugs from Chantal and Richard and our family.

Our sincere and heartfelt condolences on the news of the passing of your dad and grandfather. Alanna and I feel fortunate to have met him on a visit to Stanstead and hearing a few of his stories. Our thoughts are with you.

Helen and all of your family

Sending our deepest condolences to each of you. What a remarkable man whose gifts you’ve each been given in so many ways.
It is so hard to lose our dearly loved family and will keep you all in our hearts and prayers.

Sending our sympathy to you and you family.

Our thoughts are with you and the family. He will be remembered.

Ward Bobbitt informed me of Jim’s passing and my deepest condolences to you all. A wonderful man for sure and a wonderful family!
Love to you all.
Dan Cox

Ward Bobbitt informed me of Jim’s passing and my deepest condolences to you all. A wonderful man for sure and a wonderful family!
Love to you all.
Dan Cox