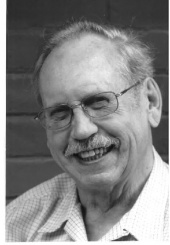 James Beattie died peacefully on Wednesday August 14 at the Wales Home in Richmond, Quebec, surrounded by his three children. He was just six weeks shy of his 90th birthday.

He was the son of William Beattie and Georgiana McKelvey of Cowansville, Quebec. He was predeceased by his parents, his older brother William, and his older sisters Frances (Porter Howard) and Julia Eris (or Dolly, as we all called her). He leaves to mourn his sister Wilma (Charles Atkinson), and many nieces and nephews.

James was born on the family farm in West Brome on October 4, 1929, and spent his early years in that region of Quebec.

He married Madeleine Pelletier on June 29, 1957. They were blessed with three children, Charlotte (Peter Griffith), William (Tammy Sears), and Allison (Douglas Griffith). Sadly, Madeleine died on January 2, 1981, at far too young an age. In 1988, Jim married Lois Bryson, who also predeceased him in 2012.

Grandpa Jim leaves to mourn his children and their spouses, his grandchildren Anne, Erin (Matthew Toth), Kyle (Marie-Pierre Bégin) and Amber Griffith (Eamonn Waters), Alexander, Jessica, and Kathleen Griffith, and James and Holly Beattie (Cody Hamilton), and his great-grandchildren Élizabeth, Liam and Olivia, as well as several long-time friends. His step-daughter Robin Bryson (the late Cameron Mahy) and her family will mourn his passing as well.

Jim worked at many jobs over the years – Bruck’s Mills in Cowansville, the mines in Elliot Lake, the northern Quebec pipeline, and CIL in Brampton, before settling in Stoney Creek, Ontario, where he raised his family and worked for 30 years in elevator maintenance, which he very much enjoyed.

He loved to fish, to bbq and have a corn on the cob feed in the summer, to read a good Zane Grey western, to listen to country music, to travel to the ocean in Maine, to visit family and old friends. He always kept himself informed about world affairs, politics, and the stock market.

In 2011, he decided to return to Quebec, and moved into the Wales Home in Cleveland. He spent four wonderful years in an apartment at the Home, making new friends, visiting family, and tooting around in his van, until a fall in 2015 left him in a wheel chair. Despite his limitations, he remained quite optimistic and brave until the end.

A donation to the charity of your choice in memory of Jim would be greatly appreciated by the family.

To my dear nieces and nephew, we send our deepest sympathy to you all at this sad time. No one can replace a father, and you had a wonderful father who loved you all so much. He was so proud of all of your accomplishments, and with the help of your dear mother you were able to fulfill your dreams and create a lovely life for yourselves. Even though we live far from you, we think of you often. We hope you and your families have the best of health and happiness.
Lots of love from your Aunt Wilma and Uncle Charlie Atkinson.

Gone to soon, My family and I, daughters Kerri and Julie will never forget the wonderful times shared at Christmas, Thanksgiving, Easter and birthdays. The many Sunday afternoons after church playing with the cats or the countless games of domino's. I can still see you sneaking Julie a couple of bucks and telling her it was ice money ( because we didn't want her rewarded for goals) so you would say it was because she had bruises after a game. We missed the cheers from the stands and even the odd road trip like the one to Montreal for 1 game. Thanks for being a big part of our lives and you will be missed. To Charlotte, Allison and William your dad had a big heart and our thoughts and prayers will be with all of you.