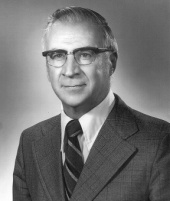 It is with deep sorrow that we report the death of Hywel, who passed away in Cleveland, Quebec on June 5, 2019. He was the son of the late Rev. David Lloyd Griffiths and Catherine Ann Johns. He was the loving husband of the late Margaret Harding of Saint John, N.B. and the devoted father of sons William and John (Penny). He was the grandfather of Elizabeth (Rick), Evan, Sara and Meredith (Phil), and the great-grandfather of Peyton and Xavier. He will be fondly remembered by all his nieces and nephews, and good friends.

Griff was born in South Wales, U.K. The family moved to Canada in 1927. He was educated at the Academy in Huntingdon, Qc. Following graduation, he entered the employ of the Canadian Bank of Commerce (now CIBC). All of his managerial appointments were for offices located in the beautiful Eastern Townships of Quebec: Thetford Mines, Richmond. Farnham, and finally the senior branch in Sherbrooke from which he retired in 1978. He served in the RCAF during World Ward 2 and returned to the Bank in 1945 at the close of hostilities. Throughout his long business career he maintained executive positions in the Royal Canadian Legion, Rotary, Lions, and Masonry. His great pleasure was a soloist in two outstanding Montreal choirs and in forming and directing church choirs. Also, in welcoming friends to the family summer cottage on Brompton Lake.

He was predeceased by sisters Gwyneth and Iris and brothers David, John and Kenneth.

In accordance with his wishes, there will not be a formal funeral. A graveside service directed by a member of the clergy will be held shortly at the family plot in the Cedar Hill Cemetery in Saint John, N.B.

Recognition and sincere thanks are owed to the administration and especially the nurses and staff of the Manning 1 and Norton floors of the Wales Home for the warmth and the exceptional care they provided Dad in his declining years.

We want to express our sympathy and let you know that our thoughts are with you. Please accept our deepest condolences for your family’s loss