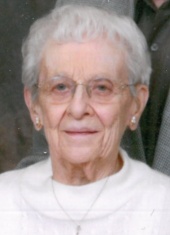 Gladys was born in Ipswich England, daughter of the late Alfred Rowland and Elsie Went. Gladys passed away peacefully on May 12th in her 96th year with her son by her side. Wife of the late Roscoe Morrison (69 years). She was predeceased by her daughter Janet, her brothers Tom, Ron and brother in law Jack. Left to mourn are her children Jay (Jean) and Susan (Frank), Grandchildren Arend, Will (Becky), her grandson Jaxson, her sister in law Noella (late Ron), Merle (late Tom) and many nephews and nieces. The family would like to express their deepest appreciation to the staff at the Wales Home (N3) for their exceptional care and concern given to Gladys. At the request of the family, there will be no service and a private burial will be held at a later date. Anyone wishing to donate in Glady’s memory may do so by donating to the lingwick Protestant Cemetery (c/o Kylie Cote, 9 Robert-Peel St., Sherbrooke, QC J1M 1W9. It will be greatly appreciated.

Would like to send my deapest sympathy to the family.thinking of you guys........Johanne and Paul

My deepest sympathy to the family