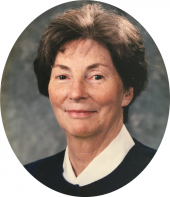 CAROL POTTER (née Witty), May 1, 1931-May 24, 2020. Georgia Carol Potter died peacefully in her sleep at Brome Missisquoi Perkins Hospital, Cowansville, after 89 years of adventure, accomplishment, and contribution. Born in the early days of the Great Depression, she grew up in the Eastern Townships, attended Bishop's University, University of Western Ontario, and McGill University. At age sixteen she taught in a one room schoolhouse; after graduating university, she joined the Sherbrooke Record, where she worked for two glorious years before marrying a tall, dark and handsome Scot, Alex Potter.

Carol and Alex worked hard to create a beautiful life together in Hudson, Quebec—raising five children, renovating a century home on Lake of Two Mountains, and contributing to the life of the community—Carol wrote for the Lake of Two Mountains Gazette and was an elder at Wyman United Church, a director at the bridge club, and an active contributor to local environmental groups. Carol went back to school when her children were in their teens to earn her teaching certificate, then taught for a year at Hawkesbury District High School. She  returned to McGill for a Master’s of Education and embarked on a career teaching study skills to college students. She got her start at John Abbott College and later moved to Dawson College where she designed the curriculum and ran the department. She designed a literacy curriculum for the Montreal YWCA, an achievement that earned her the Montreal Council of Women Woman of the Year Award for her contribution to women's literacy. Years later, she took a TESL course and taught in China for a year. A Silver Life Master at bridge, Carol designed and delivered a popular Introduction to Bridge course in Cowansville.

In her seventies, Carol met Dan Sherry, and together they had many adventures, travelling to Australia and New Zealand, and living in San Miguel, Mexico.

Carol was an intelligent, thoughtful, and outspoken woman who left an impression on everyone she met. She is sadly missed by her children Kathryn (Gord), Shelly, Derek (Gail), Alex (Maria); and Megan (Phil); grandchildren Sean (Margie), Bryan, Angus (Victoria), Katherine, George, Henry, Chloe and Jude; great grandchild Maddie; her companion, Dan Sherry and his children Bruce, David (Linda) and Cindy (Kent); and her many friends. Instead of flowers, please consider making a donation to the Brome Missisquoi Perkins Hospital Foundation or to the Heart and Stroke Foundation. The family is grateful to the hospital staff and especially to Doctors Andriuk, Chabot, and Rivest.

Our deepest condolences on the loss of Carol. What a beautifully written tribute to her. She was an extraordinary woman with many gifts. We will treasure our memories of her.