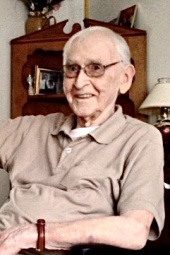 Benjamin A. Smith (Ben) passed away peacefully on April 21, 2021 at Grace Village in Lennoxville, Quebec. He was 100 years old.

Ben served in the Royal Canadian Ordinance Corps during WWII. He met Glenna at a dance one Saturday night and decided then and there that he was going to marry her, which he did in March of 1945.

Ben had a lifelong love of music and played the accordion and the drums in many Townships bands over the years. He also loved cars and never saw one that he didn’t want to test drive. Ben is survived by his wife of 76 years, Glenna (née Harrison), also of Grace Village and his son, Jamie (Amy Correll), of Columbus, NC, grandchildren Erica Caloiero (Vincent) and Graham Smith (April) and by four great-grandchildren. A memorial service will be held at a later date.

In lieu of flowers please contribute to the Alzheimer Society of Canada (alzheimer.ca).

My deepest sympathies he was a pleasure to take care of

My deepest sympathy to Glenna & family. Ben & Glenna were great.friends & neighbors when we lived in Waterville . RIP Ben.