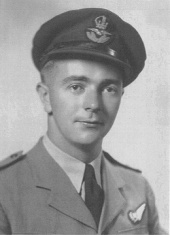 Passed away peacefully on January 2, 2020. Loving husband of the late Elizabeth
(Libby) Strong Barrett. Devoted partner of Elizabeth Ann Dohan. Len is survived
by his daughters Carolyn (Robert Carew), and Victoria (Colin Andrews) and his
son William (Katarina). He was predeceased by his son Bruce. He will be missed
by his loving grandchildren, Stephanie and David Carew and Elizabeth and Emily
Andrews, and his great grandson, Evan Carew.
Len was born in Brookvale, Australia. He joined the Royal Australian Air Force at
19, and was posted to Canada. He trained in Edmonton, and became a navigator in
the Ferry Command. He subsequently met Elizabeth who was working at the meteorological
office at Dorval Airport in Montreal, and they married in 1944. Len
was later stationed in San Diego, where he was assigned as navigator to General
McArthur for the duration of the conflict in the Pacific.
After the war, Len enrolled in the forestry engineering program at UNB so as to
prepare for a career as a partner to his father-in-law in the family lumber business.
Len became a pillar of the industry, serving simultaneously as president of the
Canadian Lumberman’s Association and the American-based National Hardwood
Lumber Association. He was always a passionate believer in and supporter of the
industry.
His other great passion, as all will remember, was tennis. An early riser, he could
fit in morning, lunch, and after work games at the Montreal Indoor Tennis Club in
the course of a single day, and here he also served as president. He will be remembered
for organizing, playing in, and umpiring many years of tournaments at Lac
Brûlé. In his later years he was instrumental in the development of public courts
on Longboat Key in Florida, and worked tirelessly to manage tournaments at the
North Hatley Club. He played competitive tennis until he was 87, at which time he
took up golf with enthusiasm, but tennis was his lifelong love.
He maintained his relationship with family and friends, returning to his native Australia
regularly to enjoy their company and keep up with their tennis exploits!
A memorial service will be held in the summer to celebrate his life.