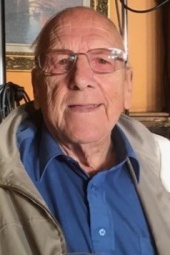 It is with heavy hearts that we announced the passing of Mr. Alcide Stanley Hartley at the Magog Hospital, on Thursday, January 21,2021, at the age of 87. Son of the late Sidney Hartley and the late Margaret Keeler.

Cherished father of Norman (Harriette), Laurie Ann (Cliff) and Brian (Tammy); beloved grandfather of Conrad, Mandy, Whitney, Tyler, JR, Macy, Morgan and step-grandfather of Jennifer, Tiffany and Michael; many great-grandchildren as well as the loving mother of his children Nicky. He was the dear brother of Cedric (Sharron), the late Leland (late Maude) and the late Lyle (late Sylvia). He will also be missed by many nephews, nieces, other relatives and friends.

As a tribute to his memory, donations to the Heart and Stroke Foundation, 100-2630, King W., Sherbrooke, QC, J1J 2H1, would be appreciated by the family.

A graveside service will be held in Crystal Lake cemetery at a later date.

We extend our sympathy to all of Alcides family . Our thoughts are with you during this difficult time of your lives. May he rest in peace.
Larry and Lorrayne Markwell.

Please accept our deepest sympathies for your loss. Just saw Alcide this fall with Norman in Ayer’s Cliff.

I always enjoyed chatting with Alcide. Not a nervous person. Good memories of him.
My sympathy to the family.

Our deepest sympathies to the family. Alcide was a good man. He had a quick wit and engaging conversation.
May he rest in peace.

The family of Alcide Hartley

Our deepest sympathies to all of you . May he RIP .

I will always remember Alcide as a colourful , humorous and friendly man. My deepest sympathy to all of the family for your loss.

Our thoughts and prayers are with all of you

my sympathies to all, Alcide was a hoot to talk to...he will be missed..

My sympathies to all.